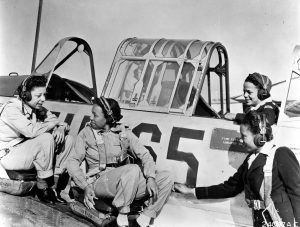 The University of Alabama Gallery presents the exhibition, Unframed Images – Photography from the Collection of P.H. Polk, January 24-February 28, 2020. The public is invited to a First Friday Reception, February 7, 5-8 p.m.

Digitally enlarged and reproduced from his original works, the photographs in this exhibit display the qualities for which Prentice Herman “P.H.” Polk (1898-1984) was known, for example, presenting his subjects in sharp detail with strong lighting without idealizing them. Polk’s subjects ranged from famous African Americans such as George Washington Carver, Paul Robeson, Langston Hughes and Martin Luther King, Jr., to working-class and poor Alabamians. One of Polk’s most influential photos featured First Lady Eleanor Roosevelt in 1941 with pilot C.A. Anderson, an African American and Tuskegee Institute’s first chief flight instructor, which helped promote the newly established pilot training program that produced the Tuskegee Airmen.

Born and raised in Bessemer, Alabama, P.H. Polk (1898-1984) came to study art at the then-Tuskegee Institute in 1916 and opened his first photography studio there in 1927. The next year, he joined the faculty of Tuskegee’s photography department and taught until 1938, including five years as department head. From 1940, Polk served as the college’s official photographer while continuing to run his own studio.

The P.H. Polk Photography Collection, which contains more than 3,800 photographs, is housed in Tuskegee University’s archives. Tuskegee University archivist Dana Chandler said, “This collection represents some of the finest black and white images ever produced — by arguably the nation’s greatest African American photographer.” The works have been exhibited at leading institutions around the country, including the Corcoran Gallery, Washington, D.C.; the Museum of Natural History and the Studio Museum in Harlem, New York, N.Y.

The exhibition is made possible through a partnership with Tuskegee University, Mississippi State University Libraries and the Southern Literary Trail.